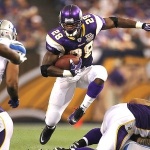 This last weekend, I found a new level to my own depravity. As I watched Adrian Peterson attempt to break the record for most rushing yards ever in a single season held by Eric Dickerson, I found myself lost in anticipation.

The odds could not have been more against AD. He blew up his knee last year and it usually takes about 24 months to fully recover from what he did to his knee according to the surgeon who performed the surgery, Dr. James Andrews.

Not only that, he plays on a team where he is the team. You don’t have a legitimate passing threat to worry about; you have Adrian Peterson. And yet he continued to run all year. All the way to this last drive for the record.

The drive began to dwindle, and it appeared that little could be done for the record to fall. Then Adrian did what Adrian does: he ran through people. He shot through the line on his way to a 29 yard run, leaving him just 8 yards short of the record, 9 yards short of breaking it.

But then they brought on the kicker…

My heart sunk as I knew that the record would not fall today. Dickerson would remain on top. AD would fall just short. I watched as Blair Walsh’s field goal soared through the uprights and the game was over, the record still in tact.

Then a thought went through my mind that went something like this, “Man, he only needed 9 more yards to greatness. Oh well. Maybe next year.”

Maybe next year?!?! Was I really saying that? Did I really believe that??? Have I grown so romanticized in our Hollywood, American culture that in order for me to remember Peterson’s season and tell my grandkids about it is if he had broken that record, if he had only gotten 9 more yards?

One time in elementary school, the wind was blowing just right, and I spit 9 yards. It is nothing. And yet it is everything.

But I found myself peering into my soul to see what it was that sparked that thought. Now to be transparent, 95% of me was and is blown away at what AD did this year and could arguably be the greatest season any NFL player has ever had, but there is still that lingering 5% that wanted more. Not much more, just 9 yards more.

We love legend and we love stories of triumph. Unfortunately for our society, the triumph must always end with the underdog on top in the final scene. There is no other option. Anything less than victory is defeat. Or in the words of the philosopher Ricky Bobby, “If you ain’t first, you’re last.” Say what you will about how ridiculous that mindset is, but think about if any part of you believes that.

I think the small part of me that began to already forget what Adrian had done was because it wouldn’t make a good movie. In the movie, it would come down to his final run. And he would burst through the line just like he did in the actual game. But then as the defenders began to wrap Jaime Foxx up, he would drag his opponents with nothing more than heart and determination. Much like Spike did in “The Little Giants.” It would of course be in slow motion and “Can’t Stop Me Now” by Afrojack and Shermanology would start playing in the background. I am tearing up just thinking about it.

But that’s not what happened. Adrian didn’t break that tackle and Afrojack didn’t drop that beat. Instead, Adrian Peterson will be in second place in NFL history. And that just doesn’t sound as good. It sounds a little too much like real life for us. We want something dramatic and triumphant and odds-defying. We don’t want normal and disappointing and runner up. And yet that is what we got. But let us not lose the legend in search of the legendary.

He is unlike any other player in our time. And if you were able to watch him this season, tell your kids about him. Tell them about how you got to see the greatest individual season in NFL history. And when they ask you, “But didn’t somebody rush for more yards than him?”, all you have to say back to them is “You know, there is someone who ran for more yards than he did, but no one ever ran for those yards quite the same way he did.”

What is 9 yards? It is a mirror that showed me how I long for the dramatic escape from reality that only Hollywood can provide. It is so small that it is right there in reach and yet now entirely unreachable. It is “disappointing.” It is second place. It is first loser. But you know what it is not? It is not forgettable. I believe it is the greatest season any player has ever had.

So while those measly 9 yards may make AD second place, it does not make him second best.

I am a grad student at Southeastern Baptist Theological Seminary. I have an undergrad degree from Mississippi State University in Communication Studies. I love anything in which a score is kept and at the end, there is both a winner and a loser.