Sports Illustrated will feature Michael Jordan on its cover for the 50th time in celebration of his 50th birthday on its February 18th issue: 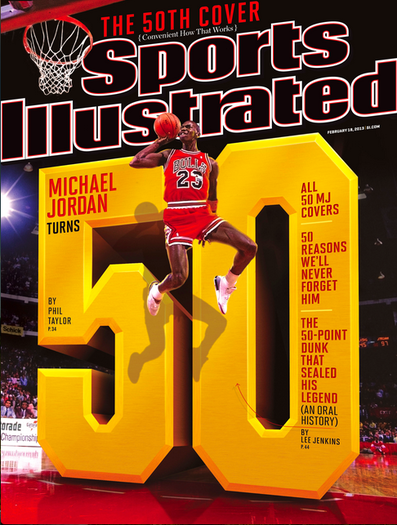 As the Chicago Tribune pointed out, Jordan declined to interview with SI:

Interestingly, SI notes that Jordan — now owner of the Charlotte Bobcats — again declined the magazine’s requests for an interview, as he has done ever since SI made light of his attempt to play baseball following his first retirement in 1993.

The article that “made light” of Jordan’s attempt to play baseball was published on March 14th, 1994. Steve Wulf’s account of Jordan’s spring training sarcastically described, as the article’s title pointed out, Jordan’s inability to become a serviceable baseball player…

The single most impressive thing Jordan has done on a baseball field occurred shortly before his first official spring training game, last Friday in Sarasota, Fla. He and some of the other White Sox were taking BP on an out-of-the-way diamond—Minnie Minoso Field, to be exact—when it came time to collect the baseballs and put them in a basket on the mound. Much to the delight of a small crowd, Jordan started shooting fallaway jumpers with the balls. For the sake of posterity and those basketball fans who miss him, it should be noted that Jordan was 5 for 7 from the field.

But to Wulf’s dismay, the magazine took his criticism a step further, with this cover:

Wulf was so irked about SI‘s stubbornness that he up and left the magazine (he went on to become the founding editor of ESPN The Magazine).

Happy Birthday! And look, we made you this magazine cover to say, “Happy 50th!”

The guys you hate